Recently, the shadow of the bear market has gradually spread to the NFT market. According to Google Trend data, the search popularity of NFTs dropped to 26 in May, a decrease of 74% from the peak of 100 set in January. The monthly trading volume of the NFT market reached a record high of $16.54 billion in January, but it has dropped to $4 billion in May, a drop of more than 75%.

While the NFT market was in a downward phase, an NFT project named goblintown.wtf became the new favorite of NFT without warning. According to NFTGo data, the transaction volume of this series of NFTs has exceeded 20 million US dollars in the past week, reaching 20.85 million US dollars, exceeding Otherdeed’s 14.02 million US dollars, and has further become one of the most popular NFTs in recent trading volume. At the time of writing this article, the floor price of the goblintown.wtf series of NFTs also reached 2.77 ETH, an increase of 15.63% within 24 hours. 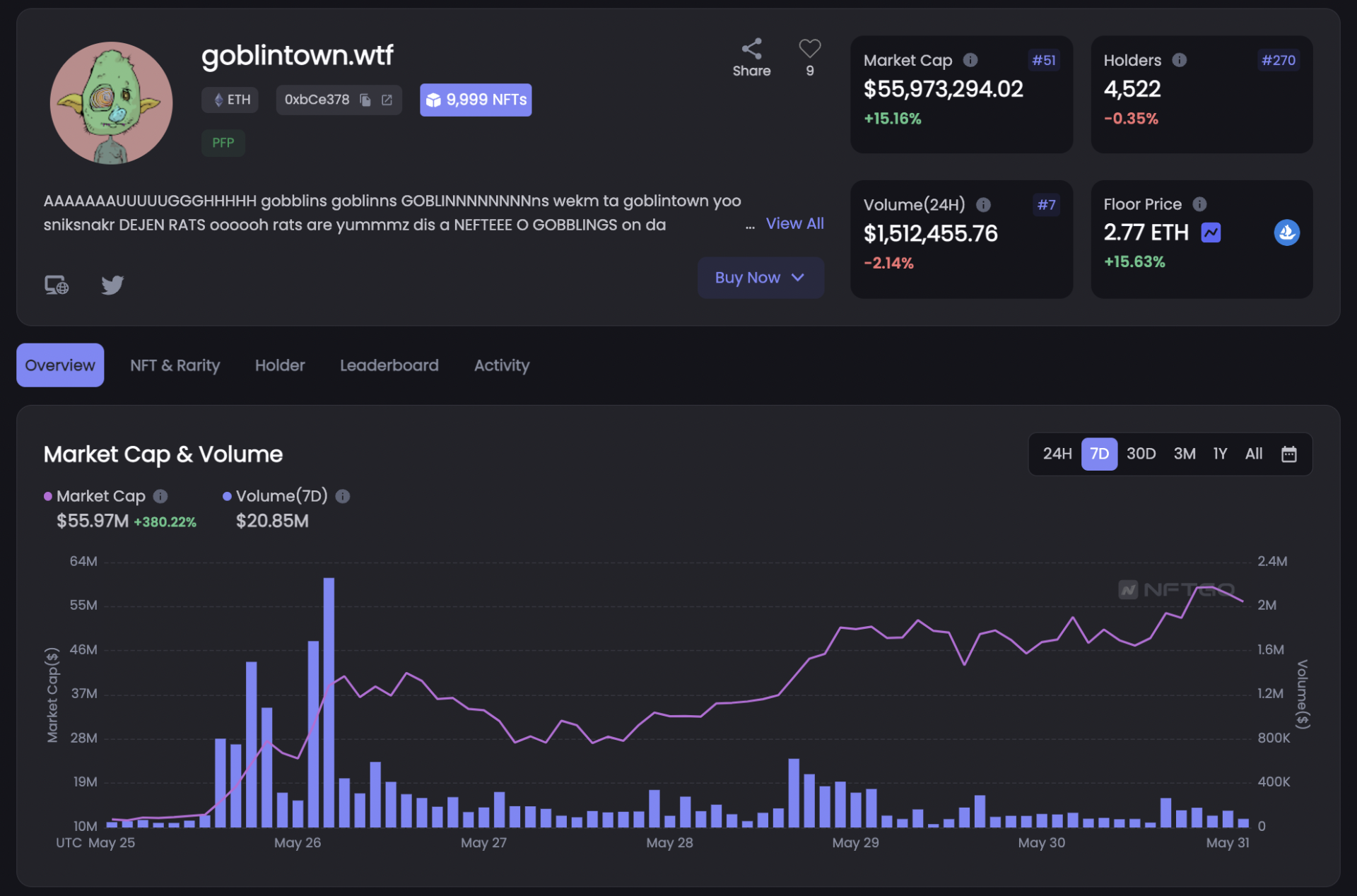 So, what is the magic of goblintown.wtf, which can rise against the trend in the NFT bear market? This article will bring you a simple understanding.

goblintown.wtf is an NFT series composed of 9999 goblins. As shown in the figure below, the goblintown.wtf series of NFTs are ugly, disgusting and stupid self-portraits. And these NFTs are minted for free.

In addition, the goblintown.wtf official website clearly pointed out that this series of NFTs has no utility, no roadmap, no Discord community, and no endorsement. So far, no one knows the team behind this series of NFTs, nor goblintown. Why did wtf suddenly become popular? After all, this project does not seem to have the potential to become a “star project”, but the NFT market is so mysterious.

Since the success of the series was so quick and seemingly well-coordinated, more and more people began to gravitate towards the team with experience in the NFT space, so after the goblintown.wtf NFT minting ended on May 22, there were quite a few people. Presumably, Yuga Labs, creator of the Boring Ape Yacht Club, was involved in the production of the project.

It is worth mentioning that such speculation is the result of the intentional or unintentional guidance of goblintown.wtf, which is also considered a relatively novel existence in the NFT market, attracting some NFT detectives to propose the idea of ​​Yuga Labs participating in it, so as to help goblintown. wtf brought a lot of heat and laid the foundation for the rapid popularity of goblintown.wtf. It is not difficult to see that the team behind goblintown.wtf has superb marketing techniques.

Also, aside from the unexpected marketing gimmicks, another part of the reason for the popularity of the goblintown.wtf series of NFTs is their unconventional origins, as we mentioned earlier, this series of NFTs has little market hype or anticipation, and the entire series is free Yes, there is no Discord yet, which greatly lowers the barrier to entry.

Finally, goblintown.wtf also happens to cater to the “goblin mode” meme culture in the context of the current epidemic, which has resonated with the public. The goblin model is used to describe the way of life of sloppy, unkempt and lazy people. Under the stimulation of the epidemic environment, this model has begun to evolve into a new scenario: people are forced to stay at home, and laziness keeps everyone from getting out of bed, not getting out of bed. Change clothes, be unkempt, eat fast food without cooking, and immerse yourself in the world of social media every day. It can be said that the goblin mode has no aesthetics at all, but as more and more people pursue it, the goblin mode has gradually become a unique meme culture.

In addition, it is worth mentioning that the overnight popularity of the goblintown.wtf project also reflects the current status of the NFT market: although the overall sales of NFTs are on a downward trend, there is still some vitality in the NFT market.