“The Space Wutubang” is the world’s first NFT pixel art game that applies radical market theory on a large scale. It will be officially opened on May 31, 2022. In Utu State, each pixel grid is a tradable NFT (Non-Fungible Token), and there are a million NFTs in the entire canvas. Utu State uses the Harberger tax to govern public space and the Universal Basic Income (UBI) system to benefit everyone involved. All mechanisms can be implemented on the blockchain through smart contracts, which are open, transparent and permanent records.

The Space Utu Bang is inspired by Reddit r/place, and behind a huge canvas created by multiple people, we have added an economic system that includes income, taxation, and profit sharing. Thus, a static canvas becomes a dynamic social experiment, from which the name “Utu Bang” comes from.

In the scene where large-scale collective creation takes place, in order for people to achieve effective collaboration in public space, game and compete in a healthy way, the “pixel market” needs to achieve maximum liquidity, and at the same time, limited public resources need to be allocated in the most efficient way. We therefore introduce a two-point economic model for The Space:

Each pixel is an ERC-721 token, which is traded in the ERC-20 token SPACE issued by The Space under the Harberger tax system. The pixel owner must mark the price of the pixel plot he owns and pay a certain tax rate according to the marked price.

Under the conditions of the Harberger tax, no one really “owns” a pixel, because all “property” is fluid. If the owner wants to keep a certain pixel, he needs to set a higher price for it to avoid being bought out easily. But correspondingly, a higher price must be paid. After the smart contract receives the tax, it will be regularly distributed to the account of the owner of each plot as a Universal Basic Income (UBI).

This set of economic rules was first proposed by economist Glen Weyl and legal scholar Eric Posner. They named the theory of Radical Markets. The contradiction of property turns competition into cooperation.

“Our generation, and the generations to come, may spend most of their lives in the online world; therefore, on the Internet, the fading public space and the over-centralized Web2 platform mechanisms are People are very worried,” said Zhang Jieping, the founder of Matters Lab and a journalist who has won multiple journalism awards. “The Space is not only a project name, but also a public space. The reason why it is called Utubang is to entrust our utopian imagination of a sustainable, self-sufficient and autonomous community.”

From December 2021, The Space Utubang has held a total of 11 pre-test events, and more than 1,800 creators have created a total of 35,000 NFT pixel grids. In a test in March this year, 50 Taiwanese artists worked together in The Space Utubang to create a painting in support of Ukraine, cast it as an NFT and put it on akaSwap , hoping to show solidarity with those displaced by the war.

Unlike any previous Web2 project, it is envisaged that twenty years or even one hundred years later, future Internet historians will be able to trace the evolution of the screen through The Space on the Polygon chain and see how the cultural symbols of the Internet world are. evolved. This is the most exciting part of The Space.

Also because of its sustainable nature, The Space’s next step is to hand over the shared governance of the Decentralized Autonomous Organization (DAO) composed of participants to form a self-sufficient public organization. Members of SpaceDAO will be able to collectively decide on the Harberger tax setting, the universal basic income ratio, canvas size, and even community funds. Participants can also contribute through the reward program and recruit more developers to write contracts. 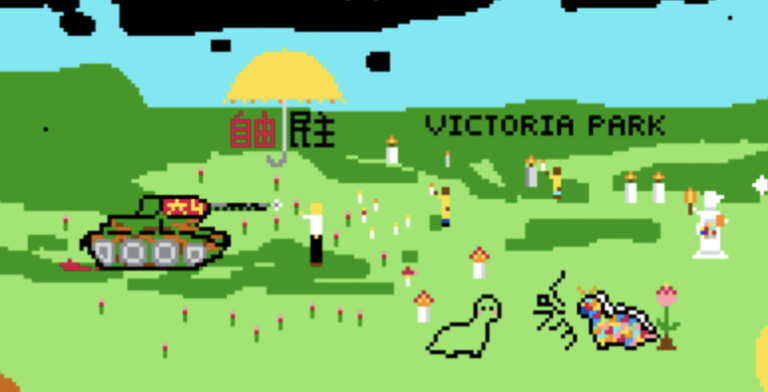 The official version of The Space opened on May 31st, the origin of the creation is a Web3 Qingming Riverside Map, showing various symbols and life styles. Starting from the creation map, creators can freely derive, create, and destroy. Utu State also started from this moment, and was jointly opened and evolved by thousands of players.

If you want to know more about The Space Utu Bang, please refer to the white paper , or join our Discord to participate in the discussion. We will be at Consensus 2022 in Austin, Texas, USA from June 9th to 12th, come and find us at booth #319 for the $SPACE event. Follow the latest insights on NFT and Web3 on Medium and Twitter @thespace2022, @MattersLab & @Mattersw3b, and welcome to subscribe to us on the official website .

About The Space Utu Bang

The Space is incubated by Matters Lab. Matters Lab hopes to create a truly decentralized, self-sufficient community and public space where creators can fully own digital assets and get the rewards they deserve in the Web3 wave. Matters Lab is also committed to developing various decentralized social platform infrastructure, including digital ownership, exploring new attention economic models, and designing autonomous organizations.